By the end of July, the Chinook salmon have finished spawning and have mainly disappeared from the rivers. Then, our main goal is to fish for red salmon, the chum salmon which have just begun to swim upriver, as well as the excellent coho salmon, which start to swim upriver at the beginning of August.

The silver salmon start their journey upriver in early August, and they may travel in enormous schools. They may travel up to 40 km in a day and then either hang around for a while or continue their journey for hundreds of kilometres to their birthplace. According to its name, the fish is silver in colour, but it also turns redder once it stops to digest and the amount of spawn or milt in its system increases. From time to time, it may be hard to tell the silver salmon apart from the red salmon. The best way is to check the colour of the head (the red salmon has a greenish head). Larger males have a distinct hooked chin. The silver salmon is an absolute late-summer favourite because, for its size, it puts up a fierce and spectacular fight. It frequently leaps several times or makes the brake of the reel screech. The reward for the battle is usually a fish weighing 3–5 kg, but the biggest whoppers are in the ballpark of 10 kg. The meat of the silver salmon is excellent in many forms, and its roe makes for a delicious treat. The same rule applies here, in that the more silvery the fish is in colour, the redder and tastier its meat. As with other types of salmon, a silver salmon school has one leader. When it moves, the others follow. The salmon that swim upstream in August are usually social creatures that stay in groups.

Chum salmon, pink salmon and silver salmon. Late to the party, the red salmon also often join these groups, and even though you may do your best to catch that one individual from dozens or even hundreds of salmon, often you end up with another fish from the school. On the other hand, it is highly rewarding when you chase that one fish amongst the others and finally manage to catch it. 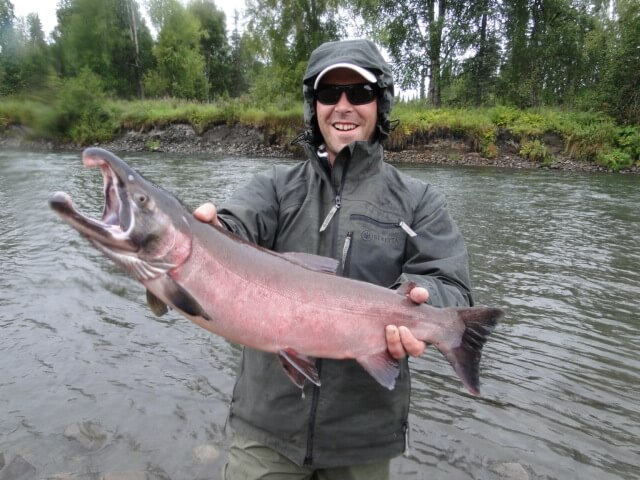 The red salmon start their journey upriver in June and continue until mid-August. Se voi kasvaa n. 6-8 kg:n suuruiseksi, mutta sen paino on yleensä noin 2,5-5,5 kg. The same rule applies to red salmon as to other salmon that swim upriver, that is, the shinier silver the colour of the fish, the less time it has spent in the river and the brighter red the colour of its flesh. The longer the salmon has spent in the river looking for a partner to mate with, the redder its skin. Ultimately, the shade may turn into a Ferrari red, at which point the meat is no longer that tasty. The best way to tell a red salmon from other salmon is the green tint of its head. In the sea, the red salmon’s diet comprises mainly shrimp, other crayfish and plankton, but the fish is attracted to various flies and lures. Sometimes, the red salmon is too picky to eat almost anything, which is a good time to surprise it with a small fly or spinner. The red salmon also puts up a good fight at the end of your line, and it may perform several stunning leaps in the air and yank out a hefty amount of line before it surrenders. There are shoals of red salmon right next to our lodges, and they like to swim up Fish Creek. Naturally, you can also find them in Clear Creek and the Talkeetna River. 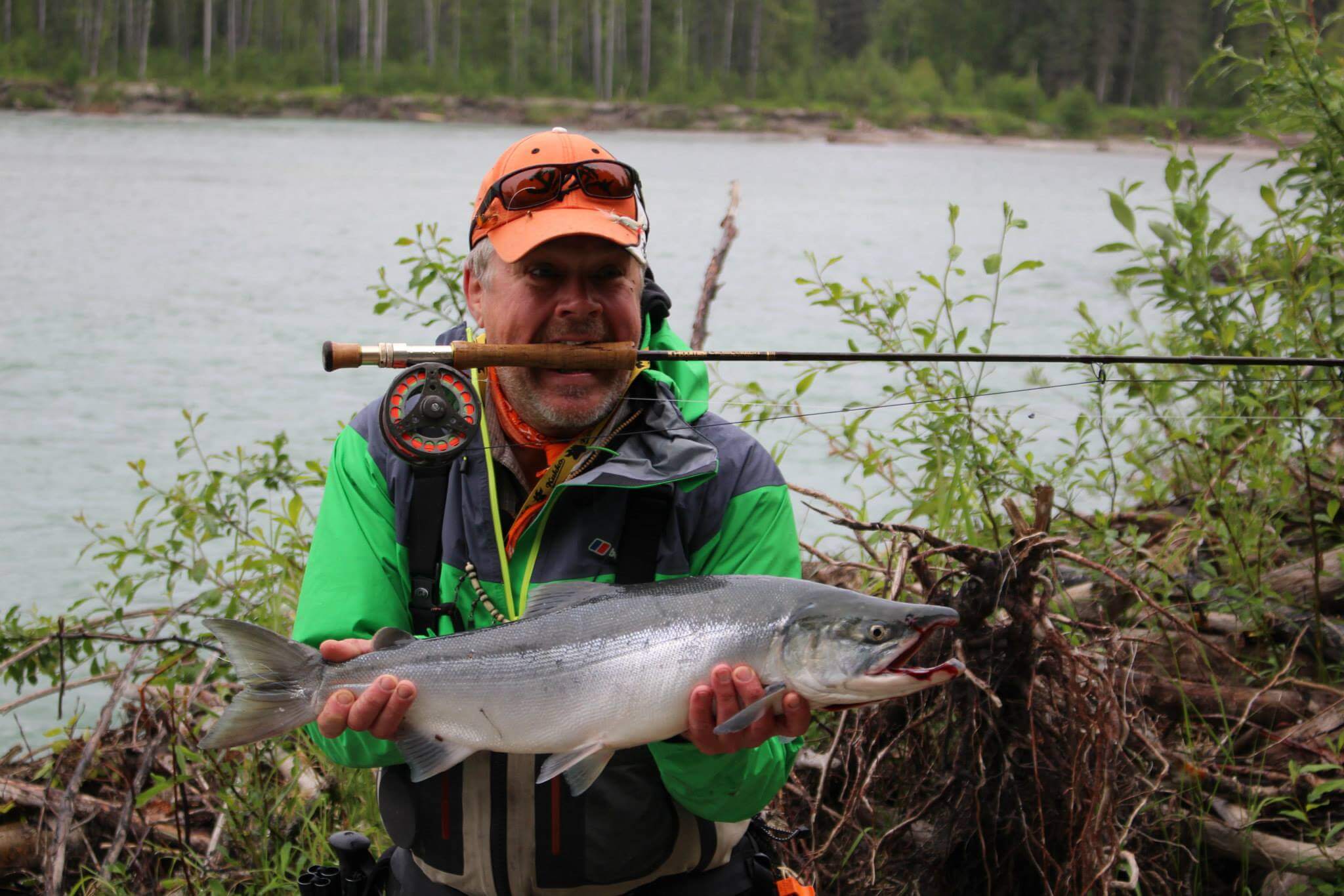 The chum salmon start their journey upriver around mid-July. They are easy to identify by the stripes on their sides and the fierce teeth, for which a dentist would prescribe braces, starting with the very first set of teeth! It is not advisable to stick your fingers in the chum salmon’s mouth; use tongs to remove your fly or lure instead. The biggest chum salmon we have caught have weighed nearly 10 kg. However, the typical weight is approximately 2.5-4.5 kg. A fierce fighter, it often seeks the bottom and refuses to come up. It may also perform enormous charges and put up a furious fight for its freedom. As is the case with other types of salmon, the chum salmon is perfectly clear in the sea and it turns red in the river, which also makes its stripes easier to spot. As with other salmon, as its digestive system dissolves, the flesh of the chum salmon quickly becomes very light in colour, which does not make the chum salmon a very attractive food fish. That said, its fighting spirit is such that it is a good option for the C&R principle. Fish Creek is also one of the birthrivers of chum salmon, and large schools of them climb up the stream behind our lodge all the way to early September. 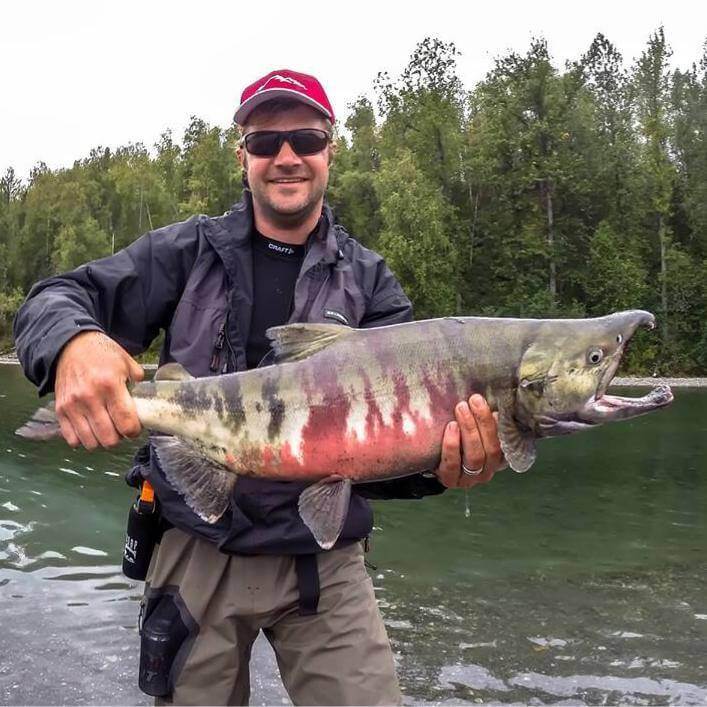 The humpy or pink salmon start their ascent slightly after the chump salmon as July turns into August. Some people claim that the pink salmon only swim up in odd years. Nonetheless, this claim has been proven wrong in the last 10 years, because pink salmon have arrived every year in great numbers. The pink salmon is the smallest of the salmon swimming up rivers, normally weighing around 1.5–3 kg. The male is easy to tell from the female thanks to its large hump. The female, on the other hand, is tubular in shape, and when it enters a river, its back quickly turns very dark, while the stomach is white. Just like its cousin the chum salmon, the meat of the pink salmon turns light after the fish has spent a short time in the river. In other words, let’s leave this fish to bears, coyotes and eagles! The pink salmon are the most passive of all of the salmon journeying upriver. However, it is unfortunately common for a hook to get stuck in its hump or fin, which means that dragging it horizontally may feel like extremely hard work considering the size of the fish. As we also want to leave this fish alive to breed, it is important to avoid harming the fish when releasing it. 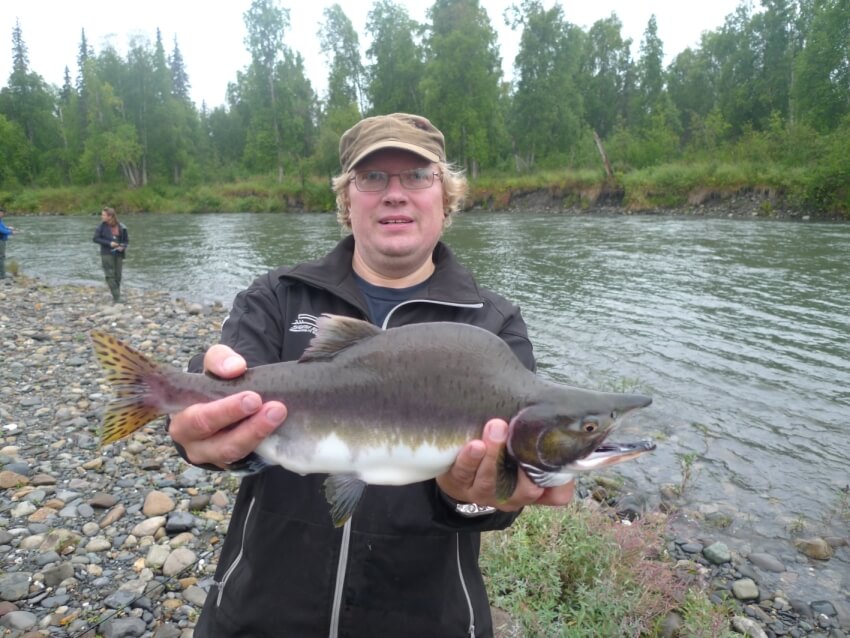 Included in the price

Manage cookie consent
To provide the best experience, we use cookies to store and/or access device data. Accepting these allows us to process information such as browsing behavior on this site. Withholding consent may adversely affect certain features and functionality.
Manage options Manage services Manage vendors Read more about these purposes
Show settings
{title} {title} {title}